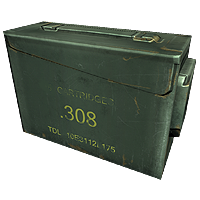 The .308 round is the most popular short-action, big-game hunting cartridge in the world. In The Dead Linger it is the ammunition used in conjunction with the Vegas rifle (.308) and will usually be found next to one, though it can also be found on its own.

While necessary to stockpile if a survivor wishes to use a Vegas rifle for an extended period of time, .308 ammunition is limited in that it is unable to be used with any other weapon in the game as of build 009. This, coupled with its large inventory size, can make it unsuitable for unsupported players.

This article is a stub. You can help The Dead Linger Wiki by expanding it.