From The Dead Linger Wiki
(Redirected from Barricade)
Jump to: navigation, search 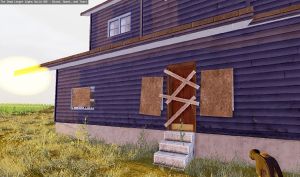 An example of a barricaded house

Barricading is the practice of blocking doors, windows, and other potential points of entry. Introduced in build 009, it is a unique feature in The Dead Linger that allows players to use objects from the environment to reinforce a building and potentially create safe zones. Zombies can damage barricades, and the strength of a barricade depends on the material used.

Barricading is free form, meaning objects can be attached to any suitable surface rather than "clicking" into predetermined hardpoints. Because of this, players have a lot of freedom in building barricades. It's possible to make very strong and efficient designs or to build inefficient and weak designs. Players will eventually be able to use virtually anything they find to create barricades; for now this is limited to various lengths of 2x4, plywood sheets and paintings.

Boards that are nailed up to cover doors and windows will have to be destroyed by survivors and zombies before they can progress past them. Improperly positioned boards will not stop zombies. The effectiveness of a barricade is based on the positioning of the boards by the survivor. A message will also appear in the chat box if the Player tries to open a door that is blocked by something, such as a nailed up board.

To nail a wooden object to another stationary object, equip a hammer and grab the piece of wood. (Default: Middle mouse button or C) Position the board against a stationary object, and then press attack to nail the boards into place. (Default: Left mouse button) This process takes 1 second. This system currently does not require nails. Holding down on the secondary attack key (default: Right mouse button) while holding an object will rotate the object.

Using the secondary attack (default: Right mouse button) on a nailed board will pry that board off. This takes around 2 seconds.

You can drive wooden 2x4s into the ground as posts. You can do this by equipping the Sledgehammer and grabbing a 2×4 or similar type of wood. Position the object vertically by rotating it by holding down on the secondary attack key (Default: Right mouse button) and hold it there, touching the ground. Then pound the object into the ground by using your attack (default: Left mouse button) This action can only be done on terrain, such as grass or dirt.