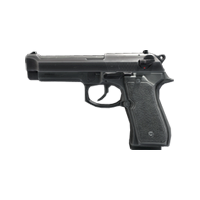 The Mediator Handgun is a mid caliber handgun. It was present in the first Alpha build. As of Alpha Build 002, the Mediator is the strongest available pistol. They are sometimes encountered in foyers and bedrooms. It is likely based off of the Beretta M9, which is popular with law enforcement and military personnel, as well as private gun owners. It is very common and has clear iron sights. It is regarded as the best pistol in the game because of its high spawn rate and its common spawn rate of ammo.

This article is a stub. You can help The Dead Linger Wiki by expanding it.