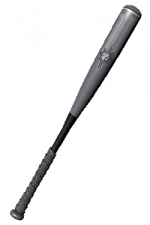 The metal baseball bat is similar in shape and size to the wooden baseball bat, but can be differentiated from that variant by its silver, metallic appearance, and the imprint of a baseball on its shaft.

The metal version of the baseball bat can be found in much the same places as the wooden version, as in most civilian buildings, but is notably rarer, and is thus slightly improved.

The metal baseball bat's only current use is as a weapon, and it is very similar in effectiveness to the wooden baseball bat, as it is a blunt two-handed weapon. However, it is slightly improved in its stats, as it features a durability of 150, and hit damage of 27, within its medium range. Its standard knockback is twice that of the wooden bat, but it swings a fraction of a second less frequently than its wooden counterpart.