Farmland is a secluded area type that is favorable to hide in. Farmland is characterized by cornfields, rural roads with telephone poles, and farm buildings. The cornfields on farmland can be used for cover, allowing a survivor to hide from the dead as well as other players. It can also, however, be a disadvantage to the player, providing a very limited view of the player's immediate surroundings. Corn can be sometimes found on the ground near the corn stalks. Grassland near farms will sometimes spawn cabbages on the ground.

Farms always contain a barn, a farm house and one or two silos. A log cabin will rarely spawn instead of a farm house.

Forests are common secluded areas full of different types of trees. boulders, and bushes. Rural roads with telephone poles are often found in forests as well. Deer are most commonly found in forests.

As of Build 12 only one structure spawns in a forest:

Grassy plains are characterized by grass fields with few trees. Rural roads with telephone poles and transmission towers can spawn in these areas.

Fields with many rocks and boulders scattered about. An occasional tree also can dot the landscape. Rural roads with telephone poles and transmission towers can spawn in these areas. 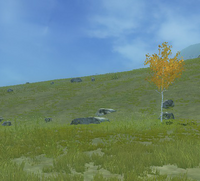