This article is about confirmed but unreleased content. Please check the changelog to see when this content will be released.
Siren or M1177 and M1178 is a armored military vehicle that shoots at zombies and players indiscriminately. The name "Siren" comes from the speaker system on top of the vehicles which uses sound to attract nearby zombies to kill. The vehicles are based on the Canadian LAV III and US Stryker armored vehicles.[1] The vehicles do not discern between undead humans or players.

M1177 Sector Control Vehicle is a military used variant of the Siren. Designed for urban and close-range conflict, the vehicle has high visibility crew compartments and a mounted thermal CROWS V gun system.[1]

The M1178 Medical Response Vehicle is the DOVRAC variant of the Siren. The vhecile has similar armament as the M1177 but also includes a unarmed ambulance platform.[1]

Towards the end of 2012 the U.S. Department of Defense contracted a company called Armstrong to construct the M1177 vehicle. The vehicle was reportedly intended for use in peacekeeping missions in Africa. In 2014 Armstrong began constructing a white "medical variant" for DOVRAC.[2] The M1178 "medical variant" for DOVRAC was launched in May 2015. DOVRAC received and generally ignored numerous criticisms on the the idea DOVRAC needed an armed armored vehicle for domestic medical response.[1] The M1177 was deployed to deal with victims of the HNZ virus. The soldiers inside were told to suspect everyone they see outside is infected and are often too exhausted and overworked to tell the difference.[3] 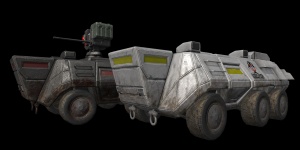