From The Dead Linger Wiki
(Redirected from Towns)
Jump to: navigation, search

Urban zones are regions of the map created by the world generator. Urban zones are areas with many buildings and a lot more zombies and supplies than rural zones.

Suburbs are a common urban zone consisting of houses and roads.

These structures will occasionally spawn in suburban zones:

Towns are more populated zones differentiated by suburbs with having more variety of structures such as stores and offices. 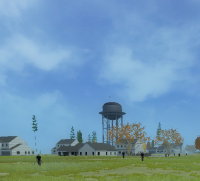