This article is about the building. For the development design tool, see Watertower. 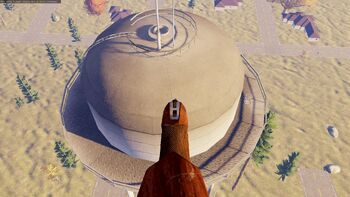 Water towers are structures currently found in towns and occasionally suburbs. It can be climbed, and is generally a safe place to hide from zombies. No items can currently be found here, however the top of a water tower can prove to be a very useful place to snipe zombies - or other players. A ladder allows you access to the large empty tank at the top of the tower.

The water tower was one of the first structures added to the game. It was useful for the developers to use the structure to test size, scale and view distance in The Dead Linger's early alpha stage. Early on in development world generation bugs would cause towns to spawn multiple water towers. The resulting large number of water towers in early maps inspired the name for the scene generator tool.[1]